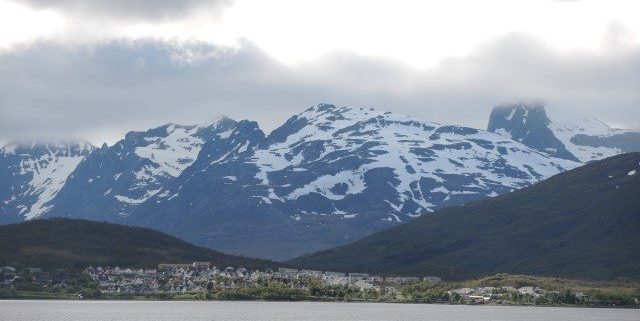 Now is the time to plan a Norwegian Fjords cruise for 2016, as they do fill up rapidly, this being one of Europe’s most popular cruise destinations. The weather is cool, the scenery fascinating and there is a serenity that makes the Norwegian fjords a true nature lover’s experience.

The mountains west of Tromso are dramatic, especially seen at 11p.m. during the period of the Midnight Sun

Norway is one of the world’s most beautiful countries. Its deeply indented coastline is more than 1,000 miles long. It is framed by a necklace of mountainous offshore islands that were once a part of the mainland. The northern part of the country extends well above the Arctic Circle, and here the verdant forests give way to tundra. This is a land of deep blue waters and snow-covered mountain crags that rise into skies that are often thick with mist.

The key to the beauty of Norway lies in its glacial past. During the Pleistocene, or what most people recognize as the “Ice Age,” massive sheets of ice scoured the land, sculpting the mountain slopes, deeply carving preexisting river valleys and gouging out deep basins. As the last glaciers began their retreat some 10,000 years ago, the earth warmed and sea levels rose. Ocean waters flooded into former river valleys that were deepened and widened by glacial ice, creating deep water channels that the Norwegians call fjords. Large pieces of the continent were separated from the mainland by the rising waters, creating the islands that today protect most of the coastline, creating calm inside passages. It is here and along the margins of the fjords that most Norwegian towns and villages are to be found, sheltered from the storms of the North Atlantic.

The port city of Haugesund, Norway, which is one of the major supply centers for offshore oil drilling.

The most enjoyable way to visit this magnificent landscape is by ship. There are three basic options to travel along this fragmented coast where roads are continually interrupted by fjords that can penetrate as far inland as 75 miles.

There are two types of cruises that operate during the summer months when the days are long and the farther north one travels daylight becomes perpetual in “The Land of the Midnight Sun.”

The fishermen’s harbor in Bergen, Norway with its colorful and famous fish market at the top end

The shorter cruises generally appeal those with limited time or budgets. One does get to visit two of the most majestic fjords with many of the large cruise ships offering this itinerary.

The longer cruises are primarily offered by the more luxury oriented smaller ships of such cruise lines as Seabourn or Silversea. These cruises are more expensive, but enable one to experience the lesser visited fjords and ports beyond the Arctic Circle. Here forests have given way to tundra and the summer sun appears to travel in a great circle around the sky, but does not set.

Visiting the fjords of Norway is an adventure sure to please any traveler that appreciates great natural beauty. The temperatures are mild, still chilly in June but warming slowly by August. However, sweaters and jackets are a must because at these high latitudes cold winds can chill the air at a moments notice.

The Sami are the reindeer herders of the far northern portions of Norway, Sweden, Finland and Russia Even if you do not believe in Rudolph, you will be captivated by the number of reindeer you see in Arctic Norway

For further details about travel by ship in coastal Norway, watch for Lew Dietch’s upcoming book, “Cruising Norway,” that will be available on Amazon Kindle in early 2016. Check out his website at www.www.doctorlew.com

The Elegant City of Stockholm